By GoWP Support on in Fishing Advice, Product Reviews 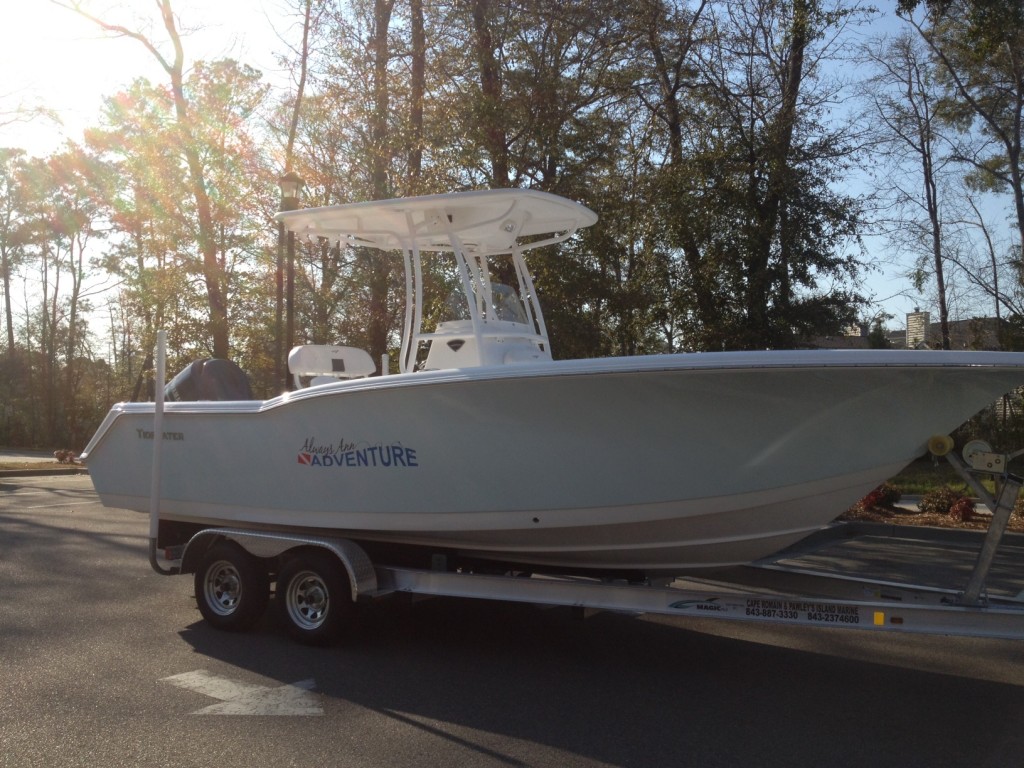 We had an 18 foot sailfish for about 5 years. We bought it from a coast guard mechanic who had taken good care of it and we always kept it well serviced as well. We would run it through the local rivers and out to about 30 miles off-shore to fish the local reefs. As the boat got older, we started to get cautious about taking it out, as even with good care, the boat was getting older and anything out of the ordinary would cause us to hesitate taking it where we wanted to go.

Last year, we traded it in and bought a new 23’ Tidewater Adventure Center console. The boat has a single Yamaha 250 horse motor on the back, and we spent the extra for the Yamaha digital gauges verses the analog gauges that would have been the base option. The boat holds 103 gallons of fuel, which is more than enough for most days on the water. We live by the rule of 1/3’s when it comes to the boat in that we always top it off before heading out and always come back to the dock with a third of a tank of gas, so we really consider 70 gallons to be our capacity. I’ve been very impressed with the accuracy of the digital gauges and have not yet found them to be off by more than a gallon on any trip regardless of the fuel usage to this point. We only run ethanol free or marine grade fuel in the boat.

The boat itself is nicely equipped with a hard fiberglass T-top with an enclosure for the VHF radio up top. We run the dual battery setup and alternate batteries each trip. We opted out of the standard fresh water wash down option and the head beneath the center console. We use this area for dry storage instead. We didn’t want the hassle of dealing with a porta potty and keeping the fresh water “fresh” that comes with those options.

The T-top has two spreader lights to aft that light up the back of the boat adequately and one spreader light to the forward. There are courtesy lights along the sides of the console and the overhead light shines white or red. We had two underwater lights installed to either side of the engine that can either shine blue, white or a combination of both.

There is a nice sized round baitwell at the back corner of the boat with a courtesy light inside it. The opposite side of the boat has a pass through with a ladder for easy boarding from the water. There is some storage beneath the front console seat and two nice storage areas beneath the forward seats. All of these are dry storage, but they do drain overboard. None of them are insulated well though, if they are filled with ice at the beginning of the day, there will be ice left in them at the end of the day, but not a lot.

We had one of the Garmin 700 series fish finder / GPS maps installed as well as a radar dome and we had a through hull transducer installed. We’ve been very happy with the performance of all of these components. We had all of them installed by a local marine electronics company, Maricom and they came to right to our house to do the install in the yard.  They also installed the stereo, the VHF radio and Antenna and the Sirius satellite weather receiver dome.

Breaking in the new motor for the first 100 hours was rough. Much like other things, we had differing advice as to how to break it in properly with some talking about not keeping it at one speed for too long and babying it to others suggesting to just run it like we’re going to run it and not baby it or it would never really break in. We did a little of both in the end (Ann was a little more aggressive with it than I tended to be). I just wanted to get through the process to get the first 100 hour service behind us and head off shore. Finally, that day arrived and off we went.

We’ve had the boat out as far as the Deli ledge here in Savannah, which is just shy of the gulf stream on a few occasions. In savannah, you pick your days carefully when going to the gulf stream. Most of the time, we’ll head out to the Snapper banks or the local towers off the coast and either bottom fish or troll, depending on what we feel we are after for the day. We haven’t gotten caught in any storms in this boat as yet, partly just from the days we choose to go out and partly due to the satellite and radar on those days when the isolated storms come up.

The boat has performed well and we are very happy with it. We’re still learning how to make the best use of the trim tabs, but the boat really runs nice. It has a very high bow with a big Carolina flare to it that pushes the water out and away from the boat. The largest issue I’ve found with the boat is that the back of my neck is generally pretty stiff at the end of the day from trying to see over the bow, but I’ll take that for a good day of fishing.

View all posts by GoWP Support →